We served, too: Celebrating LGBTQ+ veterans

Our country celebrates Veterans’ Day tomorrow, and Community Legal Aid is reflecting on its work with veterans. We have a long history of serving those who serve, with our lens focused on veterans who have struggled to reintegrate into society for a number of interdependent reasons -- physical disability, mental health challenges, economic hardship.

Today, we highlight the service of one group of veterans in particular -- our LGBTQ+ service members.

It doesn’t take much digging into the historic recruitment ads for the U.S. military to understand that our society has painted a specific picture of what a service member should look like: strong, straight, and cisgender, mostly men and mostly white.

With this limited picture in mind, we tend to miss who veterans really are. That thought rings very true for the LGBTQ+ veteran community.

Veterans (myself included) swore an oath to “protect and defend the Constitution of the United States against all enemies foreign and domestic.” We were never asked, when taking this oath, who we are or who we loved, and for all of us, the oath and subsequent service was most important.

However, despite our love of country and oath to service, many LGBTQ+ veterans have been denied honorable service and access to VA benefits because of unconscious bias, as well as overt structural discrimination. As early as the 1960s, gender transitioned or transitioning persons were prohibited from serving in the military. The “Don’t Ask, Don’t Tell” policy of the Clinton Administration led to 17 years of oppression in service, with approximately 14,000 LGBTQ+ service members ultimately being discharged because of their sexual orientation, gender identity, or HIV status. Most recently, the 2019 ban on transgender service set back almost a decade of progress.

Generations of LGBTQ+ veterans have suffered, harboring anger and dismay at a country and military that treated them as second-class veterans. Veterans advocates across the country, including our own Veterans Legal Project, work tirelessly to ensure that this community understands their access to remedying other-than-honorable discharge statuses and access to VA benefits.

This year, we’ve seen great strides in honoring LGBTQ+ service members and veterans. Most recently, the Biden Administration’s lift on previous bans on transgender service members prohibits discrimination based on transgender status. Additionally, in September, the VA announced that service members discharged under other than honorable conditions because of sexual orientation, gender identity, or HIV status are eligible for full VA benefits as long as there are no additional statutory or regulatory bars to those benefits. Within this same announcement, any service member that had a Character of Discharge case denied will have full review of that case.

These developments are huge for the LGBTQ+ veteran community because they finally recognize that military service and access to benefits should be based on character, skills, and ability to do the job -- not on who you love. Given that the mission for full equality in the military is incomplete for LGBTQ+ service members, Community Legal Aid will continue its efforts to support the service members we trust to defend this country. The battles that they face should be to preserve our citizens’ freedoms and rights, not for the dignity, respect, and recognition of their own.

As an out and proud United States Air Force Veteran, I know our service matters. Thank you to all of my fellow veterans for answering the call to serve despite the challenges. We at Community Legal Aid see and salute all of you! 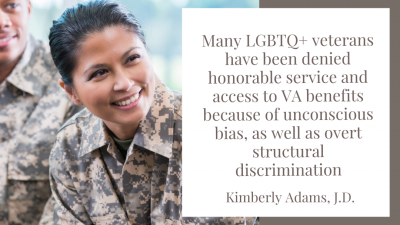