There is a saying: “an ounce of prevention is worth a pound of cure.” No where could this be more true than when it comes to protecting our children.

It’s with this context in mind that child health advocates around the state keep a close eye on lead level data released daily by the Ohio Department of Health.

By looking at the numbers, it would appear that 2020 saw the lowest number in nearly 15 years of kids under age 6 testing high for lead levels in their system.

We also know that kids have been spending more time at home. When the state shutdown in March of last year, kids weren’t just home for school. Libraries, local YMCAs, even arts and cultural programs closed to the public. School, recreation, everything happened from home.

But what happens when those homes are poisoning our kids?

Paint isn’t the only place lead lurks. It can be found in water (from pipes), as seen in the high-profile and heartbreaking stories of Flint, among others. It can also be found in the soil around high-risk homes, having leached into the same soil families may be gardening in.

And because these homes are disproportionately in poor neighborhoods with high minority populations, Black children are three times more likely nationally to be poisoned than white children. And in Akron, for example, the highest concentration of lead poisoning cases is in predominantly Black and Asian neighborhoods.

The impact of lead is permanent. Doctors can remove a lot of the lead from your system once it’s there but the effects remain.

It’s also extremely damaging, causing developmental delays and impacting children’s ability to learn and grow, as well as their behavior.

What all this points to is generations of children, in particular minority children, whose pathways in life are being permanently altered.

This week, Community Legal Aid recognizes National Lead Poisoning Prevention Awareness Week by highlighting the dangerous and disproportionate impacts of lead poisoning. We also are sharing resources below to learn more about lead poisoning data, as well as programs that are helping remove lead from Ohio homes.

Please join us in spreading awareness about lead poisoning. Forward this email. Follow us on social media and share our posts this week about lead. Click the resources below.

Prevention is possible, but only if we all take it seriously and do our part to help find and share solutions. 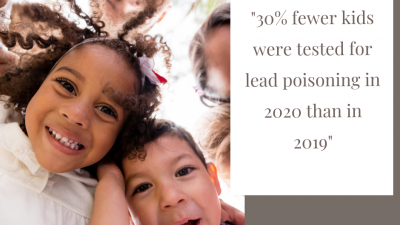