When the U.S. Department of Agriculture announced an increase in food stamp allotments starting Oct. 1st, public benefits advocates across the state gave a collective shout for joy.

After all, this is the first time in over 45 years that the public safety net program has increased the baseline amount individuals and families receive. The last time food stamp benefits base allotment increased was 1975, when a dozen eggs cost $0.77. Last year, the same cost $1.48.

When the state shut down in March 2020, millions of Ohioans lost their jobs. Our unemployment systems were flooded and backlogged for months. Children who relied on free and reduced breakfast and lunch programs at school were suddenly without that necessary nutrition.

Ohio responded by offering P-EBT (pandemic electronic benefits transfer) to help mitigate the food insecurity residents were facing. It also made it obvious that the recent 15% increase in benefits was desperately needed to provide nutritious food to families and mostly children.

At the same time, it’s sad that it took people who traditionally don’t need this system accessing it, for the people who historically have needed it to get a modest increase for the first time in decades.

Food stamps, or what are today known as SNAP (supplemental nutrition assistance program) benefits, were first piloted in the 1930s as a way to bridge the gap between excess farm production and starving children in the U.S. The program went through multiple iterations throughout the 1940s and 1960s.

It wasn’t until it was reintroduced in 1977 that brought about one sweeping change: people no longer needed to purchase the stamps, or buy into the program. Instead, it was offered based on economic need. This version of the program also expanded to include minority communities.

Since then, the program has seen relatively few changes, both in its benefit levels and in how it’s administered. At the same time, we’ve seen a rise in unfair and unfounded bias toward those who rely on the program to live.

Common stereotypes for food stamp recipients paint a fabricated picture of a lazy person, often a woman with multiple children, who continues to “rake in” public benefits and avoid having to work, all while feasting on steak and lobster. Not only is this single false narrative damaging to how we as a society value each other’s worth -- it’s also just wrong.

Across the six congressional districts Community Legal Aid serves, approximately 15% of Ohio households receive SNAP benefits. Nearly 75% of them have one or two working adults, and yet their median household income sits at $18,379. More than half (52%) have disabled persons in the home, 43% have children under the age of 18, and more than a third (37%) have one or more people over the age of 60 in the household.

The average benefit to Ohioans is $266 per household per month -- not enough to cover basic necessities for a family of four, let alone for everyone to be feasting on steak and lobster.

Our hope is that this pandemic will create a permanent shift in our communal mindset on how we view and treat our working-class neighbors who rely on food stamps to feed themselves and their families. Because there are still many cracks that exist in the system:

The only way we’ll resolve these issues and bring about lasting change is by empowering, rather than diminishing, the people most affected. 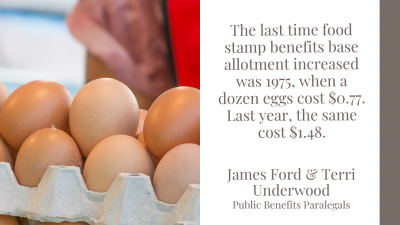