I knew I was in trouble, big trouble, one month into my marriage, when my husband’s threatening rage sent me fleeing from my home in fear for my life. But it took 13 difficult years to find the courage and conviction to leave.

Domestic violence is a problem where the solution seems obvious, simple. Just leave. End the relationship. Get out. Break free. So you may wonder, what kept me there?

The answer is complicated.

The emotional and psychological effects of abuse quickly created an inner hell, and escape was not easy.

At first, there was hope -- hope that I was just over-reacting, hope that this was fixable, that he would change. And the promise to change did come, although the change itself did not.

I felt ashamed, that somehow the abuse was an indictment on me. I was embarrassed that my home life was such a mess, that clearly I had made a mistake marrying this man.

Or did I? Doubt was another familiar tormentor. My husband wasn’t all bad all of the time. There were times when he could behave like a caring, responsive, kind-hearted individual, especially in front of others. Certainly, he wasn’t capable of really hurting me. While he wasn’t above damaging property, shoving me around, physically intimidating me, or threatening to kill me, he wasn’t a batterer. So, was I really experiencing abuse?

The emotional load continued to expand. Stress, anxiety, and fear became constant companions. These began to manifest physically into full blown panic attacks. What was he really capable of doing to me, how far would he go? When was it going to happen again?

Of course, every time another episode occurred, it was somehow my fault. I wasn’t respectful enough. I wasn’t honoring him. I wasn’t sensitive to his needs. Countless accusations, mixed with twisted half-truths, made it clear --  I was the problem. This gave the illusion that somehow I had the power to fix it,- a power I now know I never had.

As the hope for change dissipated, so did my sense of self-worth. The one who promised before God to love and cherish me was vehemently, maliciously, debasing me instead, and holding me responsible for such mistreatment.

The emotional exhaustion and gaslighting left me too depleted to cut through the lies. I was in survival mode. I could not see myself as worthy of being loved and valued, nor could I trust myself to find real solutions to the mess I was in.

If the emotional and psychological effects of abuse weren’t paralyzing enough, the mountain of unknowns was insurmountable.

Where would I go if I left?  The thought of going to a shelter filled with strangers and expectations only created more stress when I needed peace.

How would I survive financially?  The financial outlook was bleak. Career options seemed limited to low-income positions, and professional development is a luxury you don’t have when your home is a war zone.

What would happen to our children?  They had grown accustomed to hiding in the closet and calling the police and already were living in an unpredictable state of upheaval. The fear that a court would determine their future intensified my feelings of powerlessness.

Who would really help me?  I did not have a support system in place, nor did I have the emotional wherewithal to develop one.

Faced with a landscape of limited options, it somehow felt safer, smarter, to stay and endure.

There were a few times we separated briefly during those traumatic 13 years, but the beginning of the end arrived on a day when he was “disciplining” my then seventeen-year-old daughter. He had commanded her to stand with her nose on the wall while he berated and humiliated her, as he had often done to me.

I knew my interference with disciplining the children was a hot button. But when he told her to remove her glasses, I panicked in fear for her safety. Believing he was about to hit her, I placed myself between them, declaring enough was enough.

He immediately grabbed me and shoved me hard against the wall, placing his hands around my throat. Fortunately he didn’t squeeze hard, but he made it clear, in no uncertain terms, what he was capable of doing.

I finally understood -- if I stayed I would die. Maybe not physically, but in every other way. My soul could endure no more. That was the moment I settled the issue and determined it was better to face the unknown than continue to live like this.

To be clear, the journey to break free and to move toward wholeness took time. And that moment, when I finally decided that I’d had enough, was the fruit of many seeds planted along the way.

Those seeds had been planted by advocates, shelter workers, and counselors who had touched my life when moments of crisis led me to reach out for help. Because of their investment, I was eventually able to see that the abuse was because he had a problem, not because of something I did or did not do. I would never be able to fix it. They affirmed my value and encouraged me that a different, better future was possible.

And even though many times in the process I chose to return to my abuser, these patient warriors stayed in the fight, refraining from judgment and waiting for those seeds to have their day in the sun.

Yes, the solution to domestic violence seems simple, but let’s not confuse “simple” with “easy.”

Leaving is complicated. It’s hard. And often, it feels impossible. Only the survivor can determine when they have the internal capacity to forge forward on the journey to break free.

In the meantime, advocates and loved ones can support them by:

...all while knowing that the seeds planted today have tremendous potential to produce freedom and healing given time. 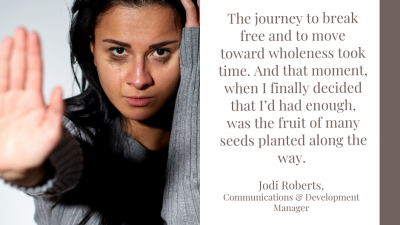