Here in Ohio, education has always been local. Students go to schools that are close to where they live, and schools have gotten their money from property taxes on the homes in their city. You can’t separate a city’s housing from its education.

Housing in Ohio’s cities has a long-standing history of segregation, what we think of (and commonly refer to) today as “de facto” segregation -- segregation by happenstance. This is the notion that people of the same color like to live around one another; or that people of a certain race are harder workers and therefore are more likely to have better paying jobs and be able to afford bigger, better homes.

But what’s clear if you look at historical housing law is that there is nothing happenstance about it. The segregation we see today was very much intentionally created, or as Richard Rothstein plainly calls it in his book The Color of Law, “de jure” segregation. (That’s lawyer talk for: our country made laws that legally separated races by telling people where they could and couldn’t live, based on the color of their skin.)

Redlining segregated cities by predetermining where white and Black families could live. Public housing expansion during the 1930s and 1940s deepened these lines of segregation by establishing separate housing units for different races. Restrictive deeds and zoning laws had the ripple effect of furthering segregated housing, and the lack of economic opportunity and unequal pay for people of color further limited access to more affluent neighborhoods even once redlining was no longer an issue.

And I know, we’re supposed to be talking about education, so here it is: In a society where the educational system is structured around where people live, racist housing laws have had a direct impact on how and where children are educated.

Here in Ohio, there were no state laws that officially segregated white students from African American students. Individual school districts were left to govern themselves, and some did have policies or local ordinances that separated students by race.

Often, though, it didn’t matter whether a school district had such rules, because the housing laws that separated where families could live meant that in many communities, schools had only either white or Black students.

After Brown v. Board of Education outlawed school segregation in 1954, school districts across the state enacted policies aimed at integration, such as busing kids to different schools in an effort to “mix” the student population -- a flawed strategy that angered parents and didn’t get to the heart of the problem. By then, cities themselves were segregated, and so busing within a district (which was the extent required by Brown) couldn’t achieve integration.

What’s hard for many to grasp is that while segregation in schools has been illegal since the 1950s, the effects are still very much alive today. Much of this can be attributed to the resources that flow into the school district -- and where those resources come from.

Let’s look at a couple northeast Ohio counties as examples. 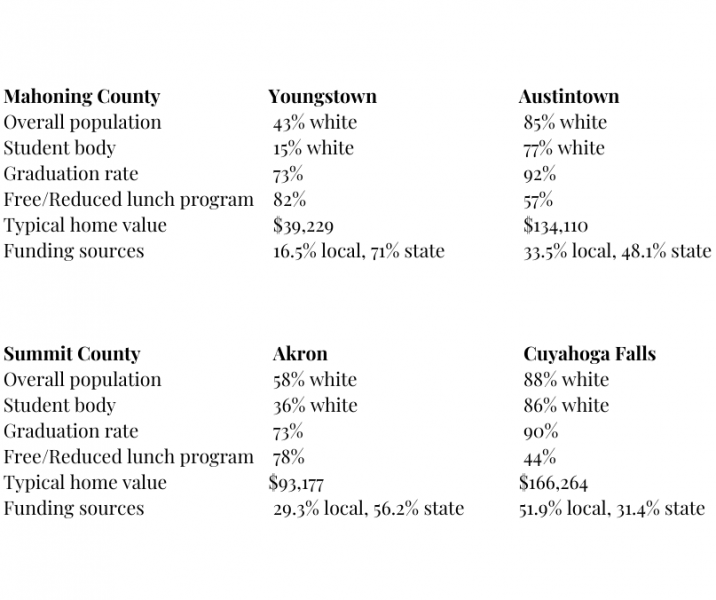 It’s pretty clear what all this means. The resources that are available to a school are directly tied to the wealth of the neighborhood it’s in, which directly impacts the students. We hold most of our wealth in our homes. Because Black families have not had the opportunity to grow wealth from owning property, their kids’ schools must rely more heavily on what’s allocated through the state formula. Job loss, economic instability, and urban flight only increase this divide, often resulting in higher earners residing in suburbs surrounding economically poor areas. And in our state’s history, we’ve not stepped up to change that, until now.

Ohio’s recent passage of the Fair School Funding model will directly benefit minority students across the state, and it will do so much more. It will benefit all students as academic outcomes improve across the board. And as schools improve, a city becomes more desirable for growing families, driving property values up and improving living standards across the board.