Ben was furloughed because of the COVID-19 pandemic. With no internet, he had to call in to make his weekly claims, but he kept getting hung up on. He depleted his savings covering his bills. After his lawyer got involved, the money was in his account within 48 hours.

As an independent contractor, Andrew needed the federal pandemic unemployment program when he lost work. Two months after being approved, he still had not received a single check. It took a lawyer to get his benefits.

Jacquline submitted her unemployment application six times and still was told she was missing documents. After her lawyer got involved, it was discovered that a glitch in the system was preventing her application from being processed. After five months of struggling, she finally got her benefits.

John’s heart condition kept him from working during the pandemic. His unemployment application took so long to process that he drained his savings account and received an eviction notice from his landlord. After his team of lawyers got involved and negotiated an agreement with his landlord for him to stay, he was given several months of back-paid benefits to catch up on what he should have been getting all along.

Each of the above tells the story of a real client Community Legal Aid has helped in the last 16 months. These stories are important, if for no other reason, for the fact that they tell the true story of our unemployment system.

And not one of these people was lazy or looking for ways to get out of working.

An employer failing to take steps to protect your health from a potentially deadly virus. Caring for an elderly or immunocompromised family member whose facility closed. An employer not offering work-from-home solutions. The shifting job market that has become the new normal during this pandemic, where there is a mismatch of skills that prevent people from finding suitable employment.

These are all valid reasons for not being able to work right now.

So, who does qualify? Unemployment benefits are only issued to people who had been working, had made a significant amount of money, and are out of work through no fault of their own. In order to even qualify, you must meet the following criteria: (1) you have to have worked at least 20 weeks during a qualifying period; and (2) you have to have earned enough per week to meet a minimum wage threshold.

Another common misconception is how much people earn on unemployment. It’s not as though you get your full income. In reality, the unemployment calculation is half of your usual wages at best, and that’s only if you don’t make too much. Ohio’s system sets limits on how much you can receive, and for someone with no dependents, it’s less than $500 per week.

Finally, as we’ve seen most recently, it isn’t easy to actually get your unemployment benefits, even if you qualify. From the well-known fraud scheme, to the less publicized breakdowns that have left thousands of Ohioans in financial limbo for months on end, the system is fraught with both human and technological errors. In the last 16 months, we have seen real cases of families facing eviction, utility shut-offs, car repossessions, threats of foreclosure, impossible choices between food and medication, all because the benefits they earned and qualify for weren’t coming through -- until a lawyer called on their behalf to intervene.

It is true that some of our clients have earned more from the unemployment system during the pandemic than they did while working. Can you say this is incentivizing people not to work? Perhaps. But just as many people do not have jobs to return to. So we think this begs a better question: Why can’t people afford to live on the wages that are available to them in the workforce?

For decades, we at Legal Aid have worked exclusively with our poor neighbors throughout northeast Ohio. In the last decade alone, the minimum wage in our state has risen by $1.40, or $56 per week. The current minimum wage in Ohio, $8.80, translates to just over $1,400 per month for a full-time worker. With the average rent for a two-bedroom unit in Ohio sitting at just over $740 per month, that places the average single-income family’s housing-to-income ratio at higher than 50%, well over the recommended 25-30%. And this only speaks to the 50% of minimum-wage Ohioans who have full-time employment. Ohio still is in a pandemic recession with a high unemployment rate, and many people simply cannot take the low-paying, no-benefits jobs currently available because they cannot afford to make ends meet.

We also know that our society is plagued by disparities created by these structures -- that women earn 84% of what men earn; that Black and Brown Americans have the highest unemployment rate of any ethnicity; and that children are far more likely to live in poverty than adults.

When you’ve been fortunate enough to never have experienced these systems, it is easy to misunderstand them and easy to judge those who rely on them. But as many of our friends, family members, and neighbors discovered for the first time in the last year, anyone can fall on hard times. It can happen to any of us. This is why we have social safety net programs -- to help those of us who need it during difficult times.

Unemployment benefits are not an incentive for lazy people who don’t want to work. They are earned, and they provide a lifeline to people separated from work through no fault of their own. They offer a boost to a sluggish economy, and we should stop pretending they aren’t vital -- not just to families, but to the recovery of Ohio’s economy. 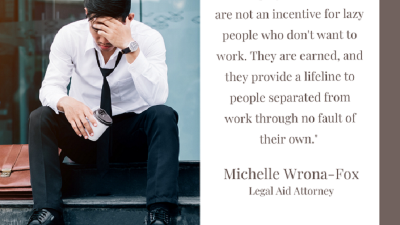